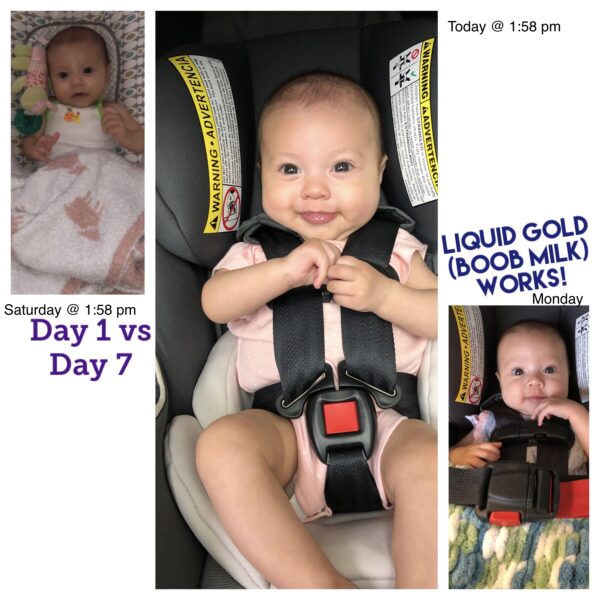 It was the moment every expectant Mother waits for, Kailey was going into labor with her third child! At 38 weeks, she had enjoyed a healthy pregnancy, patiently waiting to meet her daughter.

Just 36 hours later, Kailey and her new baby Genevieve returned home, ready to start family life. But the next few weeks would bring the kind of heartache no parent should have to endure.

A few days later, Genevieve had lost weight, her skin had yellowed and she was admitted to the NICU. Her doctors tried everything they could, running tests and struggling to diagnose the problem, while Genevieve continued to get sicker.

Then came a day that Kailey will never forget. She sat with Genevieve’s GI Consultant, a doctor who had treated Kailey herself and knew the family well, and both women cried. The Doctor gave Genevieve what she called a ‘Final failure to thrive notice’; she had just 2 weeks left to live due to Malabsorption Disorder.

“It was heartbreaking. I will never forget that moment.”

The grief was overwhelming. Kailey knew the disorder well, having helped her second child through it. But this time, Genevieve was not responding to formula milk in the same way that her sister had. Every formula the doctors tried made her sicker. Both Kailey and her doctor vowed to keep researching, and doing everything they could.

Back at home after days of searching for a miracle, Kailey found an article about donated human breast milk, and just a few minutes later received a call from her doctor who had found the very same site! That was the first of several “magical moments” that Kailey describes, when telling us her story. After learning that donor milk can contain higher protein and a controlled calorie count, Kailey knew this was a solution she had to try…and FAST. A few more minutes of searching, and she found the Mother’s Milk Bank of Florida.

It was a Friday afternoon, and Kailey, a single working mother, made the phone call that would change her family’s story forever. Just two hours later, in between finishing her shift and picking up her kids from daycare, she completed financial aid forms, had her doctor send over a prescription and made the 2 hour drive to Orlando. She arrived after the lab had closed, at 5:07 p.m. but found Dr. Natoli was waiting for her, with milk ready for her to take that very evening.

“I will never forget the relief I felt.”

Step by step over the next few days, Genevieve started to show signs of improvement. She gained over 1.5 pounds, her color brightened and she began to show signs of digestion. Kailey cautiously started to believe she may have found that miracle after all.

Fast forward 4 weeks and the family had developed a good routine of feeds and milk collection, ensuring Genevieve had a constant supply. Then came the news; Genevieve had medically turned a corner and her updated status now said ‘monitor failure to thrive’, with the final notice removed. There was hope!

“Her Doctor is overjoyed with the progress she has made. She is just this bright, bubbly child that is continuously happy all the time.”

Genevieve continues to receive donor milk, around 320 bottles every month, and is thriving!

Kailey wants her family’s story to be told, and hopes it will help other Moms who are dealing with the life-changing experience of caring for a medically fragile baby.

“I can imagine what some parents in the NICU would be going through right now. I would have buried my baby a year ago. Donor milk literally saved my baby’s life.”

She hopes that sharing her story will promote awareness around the power of breast milk, and encourage nursing mothers to become donors!

“This is a chance to make a difference…to lessen the pain of a mother or parent. You can save a life.”

She wants to thank the donors who helped her daughter; “These are just strangers that are trying to help someone they don’t even know. It’s incredible”.

Even If you are not a nursing Mother, you can still help! The Mothers’ Milk Bank of Florida is a 501c(3) charitable organization and from the beginning, we have relied on the community’s support to expand and save more lives via monetary donations. When you donate to our Babies at Home Program, your money helps Moms like Kailey cover the cost of recieving donated milk, and our expenses in collecting, processing and distributing.

“I’m a single mom of 3 kids and with financial aid, and a second job, I was able to do whatever it takes to help my child.”

Kailey and other parents like her are relying on the powerful work we do here at Mother’s Milk Bank of Florida. Join us on our mission today!